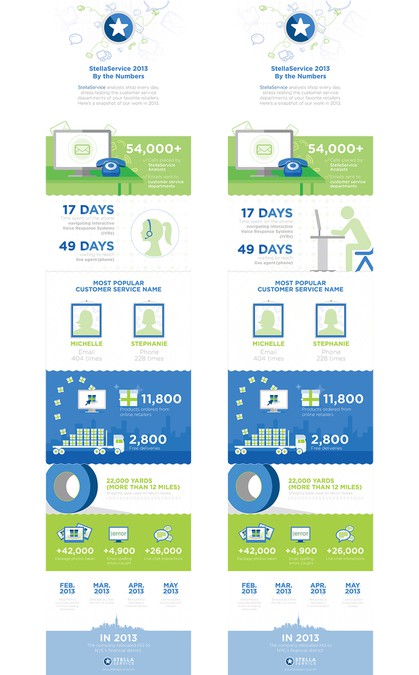 Design a Killer Infographic for StellaService

Evan3591 needed a new infographic design and created a contest on 99designs.

A winner was selected from 52 designs submitted by 33 freelance designers. 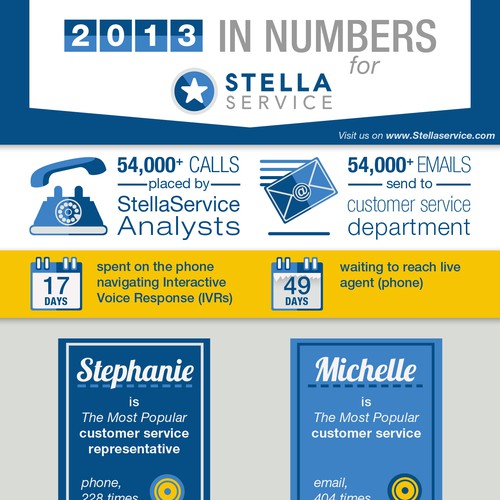 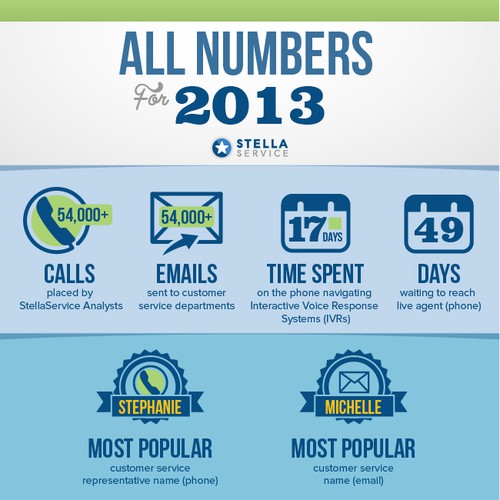 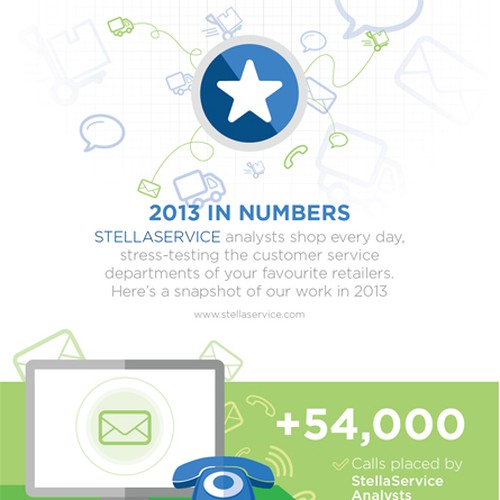 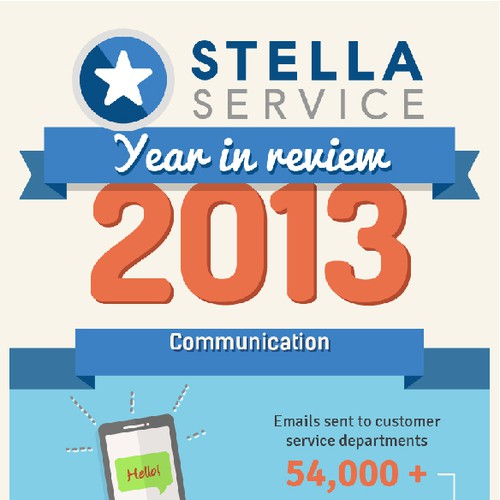 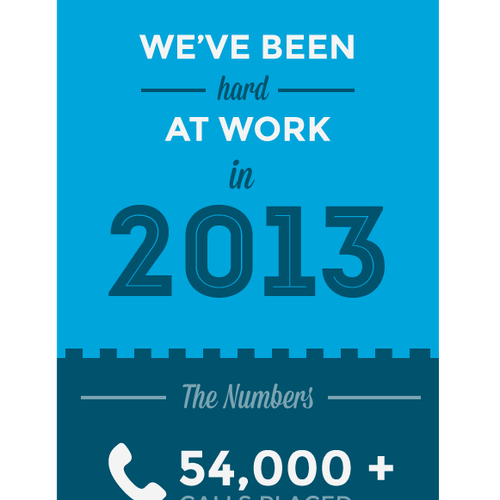 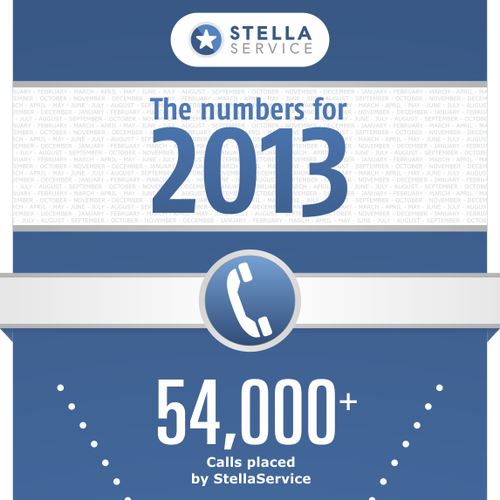 Finalist - Lanching Angenan
Very quick with revisions and easy to work with, will use again!
- clientservices 9

How Evan3591 started their infographic journey

Story to tell in the infographic

Looking for a year in review infographic that presents our company’s 2013 operational stats and company milestones in a compelling + shareable way.

Data to include in the infographic

We would also like to include some milestones from this year:

+ In February 2013, the company launched the Stella Metrics platform and received $15 million in Series B funding.

+ In March 2013, the company received a grant of $250,000 from the New York City Economic Development Corporation to relocate and hire in Manhattan’s Financial District as part of the Take the H.E.L.M. program.

+ In May 2013, the company announced a multi-year agreement with Google Inc. StellaService ratings and data are licensed by Google in a multiple offerings including the Google Trusted Stores program.

The company relocated HQ to NYC’s financial district in 2013. One element could be a map, but not required.

Elements to include in the infographic

Would be nice to have icons for shipping, phone, email, live chat, deliveries, etc.

Here is last year's infographic. We want to completely scrap this design but wanted to provide it for reference.

http://media.stellaservice.com/publ…raphic.png
Here's a video overview of our company: https://vimeo.com/64738009

Here are a couple annual reports that we like visually:
http://www.warbyparker.com/annual-report-2012
https://www.airbnb.com/annual

And here is a static infographic that we like:
http://www.nerdgraph.com/what-a-sec…o-for-you/

Create an infographic for a financial technology company!
£ 399
We are a niche IT consultancy that specialises in financial trading systems integration....
51
entries
5
designers
Create an Engaging Comparison Infographic for Big Brands
USD 599
ReviewPush helps companies and brands manage their online reviews. (i.e. Yelp, Google Plus Local, Foursquare, TripAdi...
23
entries
11
designers
SolarTech Infographic: Solar Energy - All you need to know
£369
SolarTech have unrivalled experience in the design, installation and maintenance of renewable energy systems....
46
entries
16
designers
Comparison of Optimization Software Infographic
$599
River Logic is a software provider of prescriptive analytics and integrated business planning. Our software enables ...
18
entries
6
designers
Radio Station Infographic for Sales - Potential Future Work
US$659
We need to turn these slides (which describes the profile of a radio station's audience) into an infographic. Data...
23
entries
11
designers
Design a compelling infographic for online testing software
$599
We develop software that universities and schools use for online testing....
63
entries
14
designers

We saved a spot for your infographic contest.

Get started now
Create Marketing Infographic
US$899
We are a private equity firm (we buy companies). My internal group helps our firm keep up to date on marketing trends.
14
entries
9
designers
myrace
£ 459
Sport race results statistics as info graphic...
22
entries
8
designers
Top BITCOIN Company - Help Design A Beautiful Infographic
USD 899
Bitcoin IRA is the world’s first company to allow customers to purchase Bitcoin and other cryptocurrencies for their I
30
entries
12
diseñadores
Design a Real Estate Development Analytics Infograph
599 US$
We sell data & analytics to real estate investors and developers to help them make better decisions.
44
entries
11
designers
Gurucul Infographic - What We Do
US$599
Gurucul is a global cyber security company that is changing the way organizations protect their most valuable assets, da
37
entries
14
designers
Make this InfoGraphic Pop
USD 599
We have developed the idea / concept for an infographic, need a designer to make it pop
43
entries
20
designers
Learn more about infographic design
See how it works