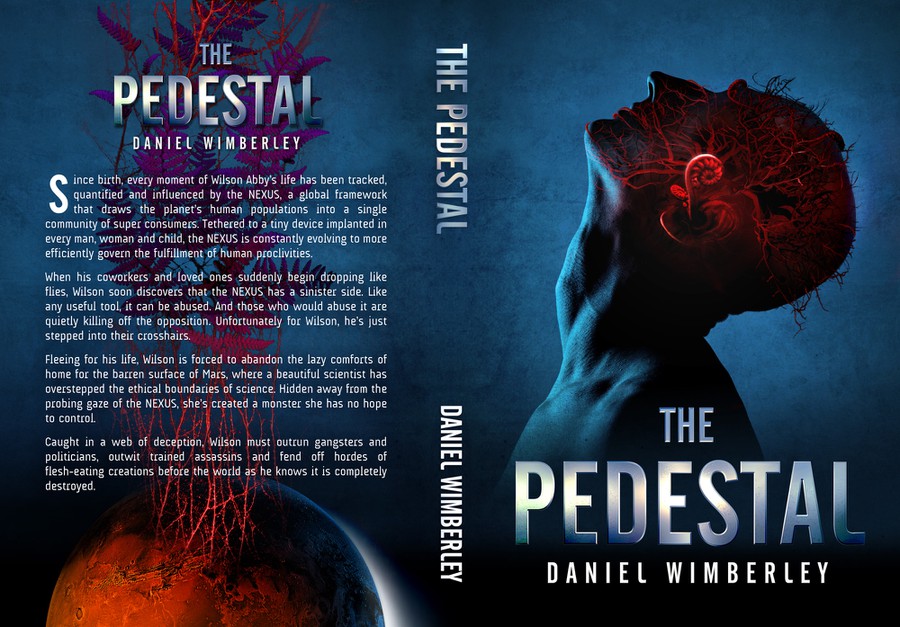 Create a creepy cover for my upcoming novel, The Pedestal.

danielwimberley needed a new book or magazine cover design and created a contest on 99designs.

A winner was selected from 158 designs submitted by 28 freelance designers. 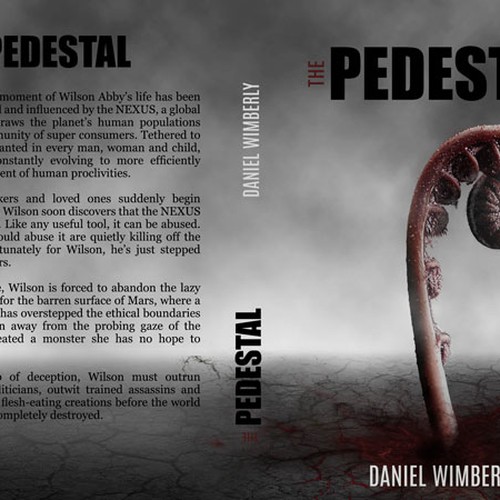 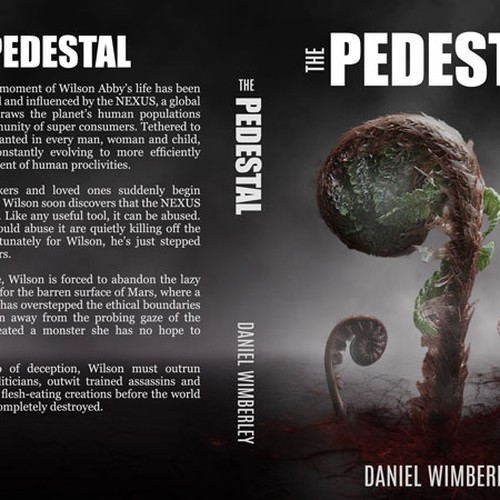 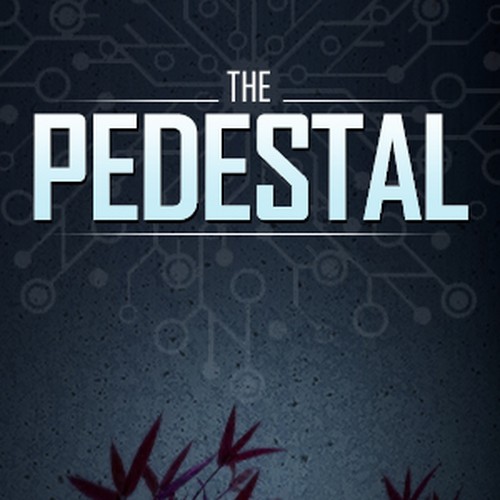 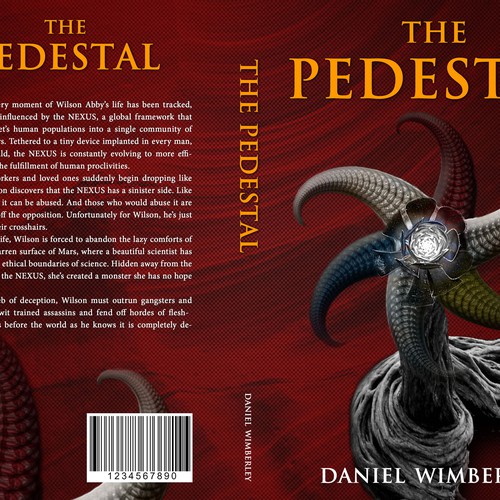 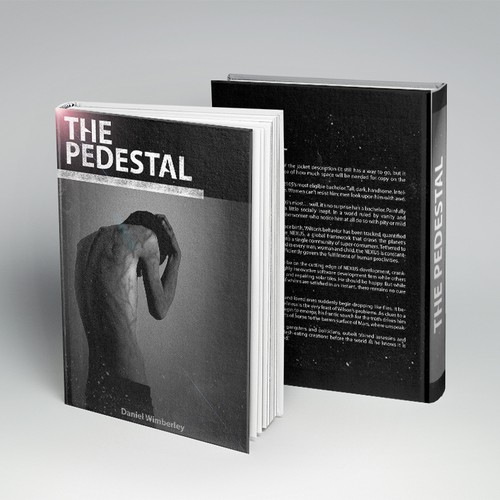 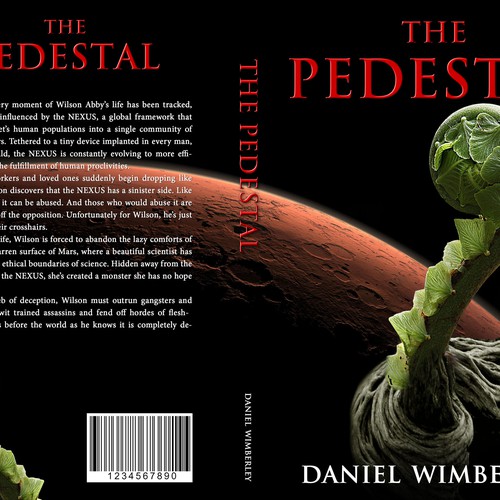 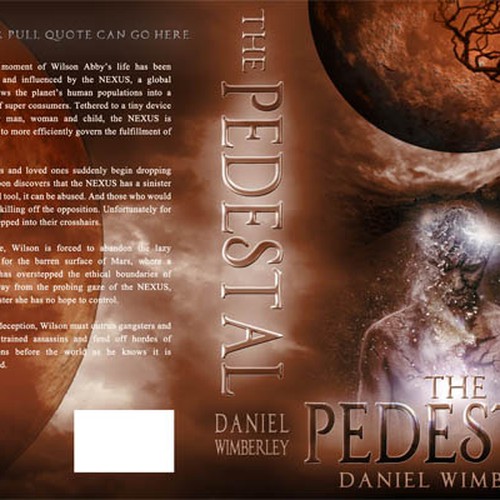 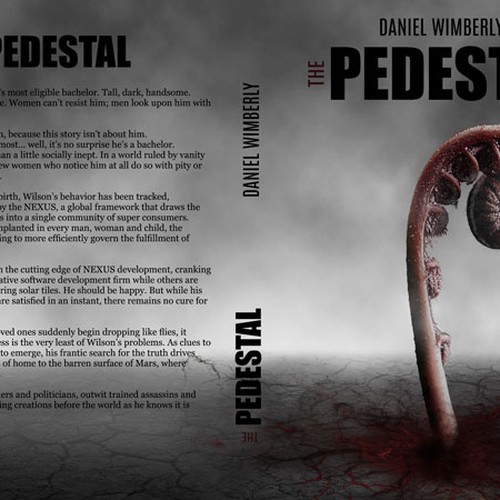 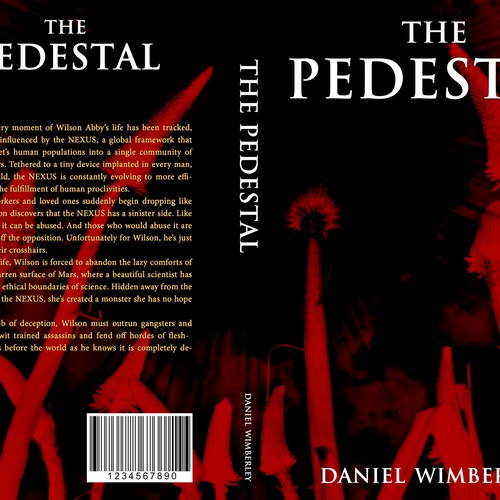 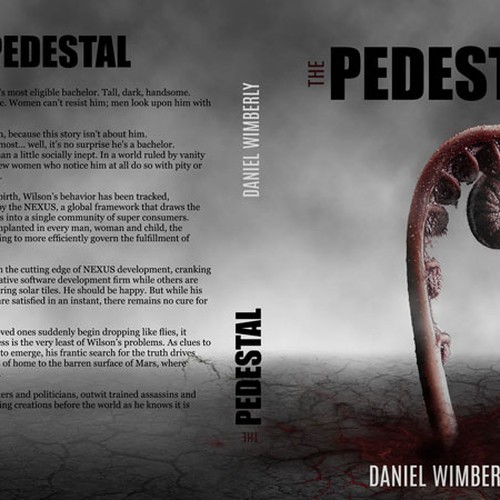 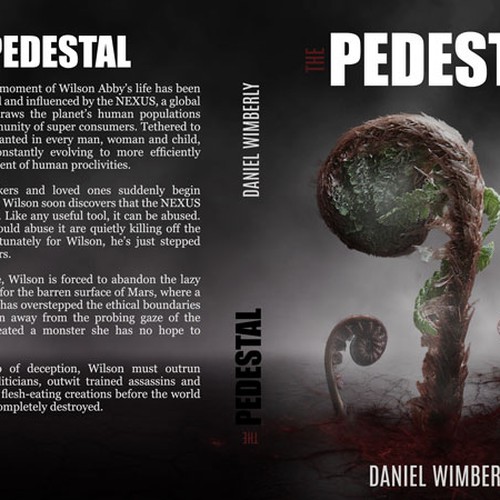 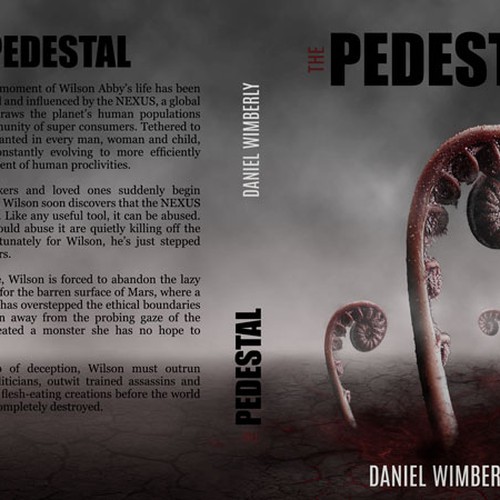 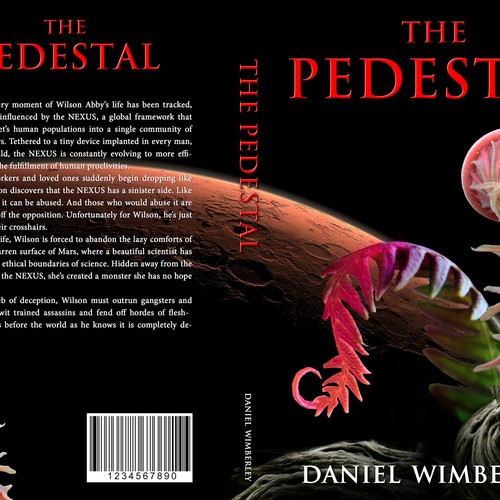 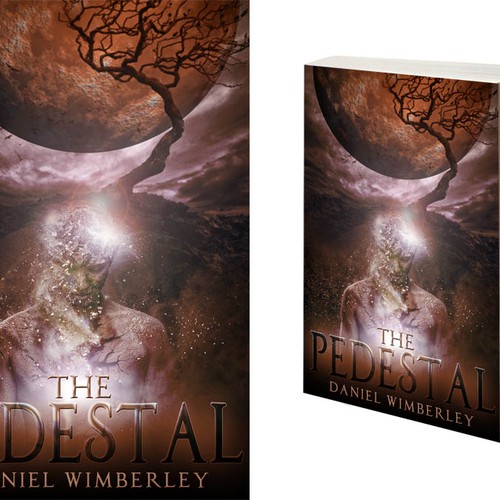 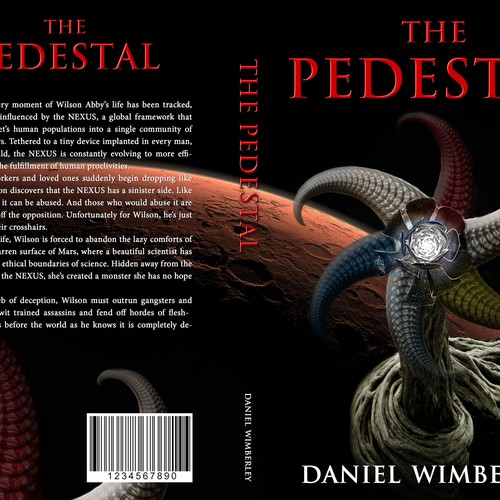 Winner - _Prospero_
Prospero took my concept and built something even more detailed and beautiful than I'd imagined. Truly an incredible artist!
- Okelberries

Finalist - Zoe Shtorm
We have worked with Zoe on a number of projects and we couldn't be happier with the work she has created for us. Her attention to detail and willingness to do what ever is needed to bring the project to life is brilliant. Thank you Zoe
- sarah.dawson

Finalist - Mellonmac
Mellonmac has a great understanding if what I'm looking for. With a few cue's from me he always comes back with a range of great designs from which we hone in on the final choice with ease. I really value his ability to interpret my needs into great designs, and the speed of his response.
- Simon.morley9

Finalist - gp Z
Working with G has been great. She read the project description and really took to heart the elements I was trying to capture. She made every tiny adjustment I asked for, made recommendations I never would have thought of, and made this project a pleasant experience for me. I will definitely use her skills for the next book in this series and many other projects to come!
- StephieWalls

My company provides website development, website integration and graphic design services to small businesses and individuals. My business will operate as an independent publisher for a novel I intend to print within the next month or two.

I will be publishing a science fiction thriller entitled, "The Pedestal." The title refers to the entire world's singular reliance on a global network, called the "nexus". Nothing happens on plant earth without the nexus tracking it, so entrepreneurs sometimes take illegal research and development into space, where the nexus can't watch.

A bizarre species of plant called a "blood plant" has been genetically designed on a Martian research facility. It has been carefully engineered to embody a variety of hallucinogenic properties, perfect for earth's starving illegal drug market. Unfortunately, because of Mars's harsh environment, the plants evolve to be extraordinarily hearty. They literally root on anything.

When a few blood plant seeds are prematurely introduced to earth, the alien plants quickly overtake local plant populations. They grow with unnatural speed, and they feed on the heavy metals found in building structures and electrical systems. In very little time, the entire nexus infrastructure is compromised. Without the nexus to coordinate day-to-day activities commerce and social interaction, the human population returns to the dark ages virtually overnight.

I'm looking for a design that draws from the creepiness of the plants, which are both lethal and able to grow literally anywhere on earth (from a solid piece of concrete, to your face, if you were unfortunate enough to fall asleep with a seed on your pillow). The male plants are small (knee high) with a purple hue. The females grow like trees on crack, up to 100 feet tall in a couple of weeks. The underside of their leaves are blood red. Both resemble a cross between ferns and bamboo in terms of form.

As well, I'd like to incorporate the "pedestal" metaphor if possible. Looking for something simple and powerful. Not a fan of 'busy' designs, and I'd prefer to not see any "characters" in the design. I may consider one exception: there is a scene where a man falls asleep after a blood plant seed has gotten into his ear on Mars. He is discovered curled up as if asleep, only a blood plant has taken root in his head and grown from his ear as if from a flower pot. Kind of a creepy image which may or may not work as a cover design.

Also, I'll be producing a book trailer in the near future, so no space suits or space ships, since your designs may not mesh with the designs we end up filming. Beyond that, I leave it to your creativity.

Here's a rough draft of the jacket description (it still has a way to go, but it should give you an idea of how much space will be needed for copy on the back cover):

Okay, now forget about him, because this story isn’t about him.
Meet Wilson Abby, 2105’s most… well, it’s no surprise he’s a bachelor. Painfully ordinary, more than a little socially inept. In a world ruled by vanity and self-gratification, the few women who notice him at all do so with pity or mild irritation. Good times.

But life isn’t all bad. Since birth, Wilson’s behavior has been tracked, quantified and influenced by the NEXUS, a global framework that draws the planet’s human populations into a single community of super consumers. Tethered to a tiny device implanted in every man, woman and child, the NEXUS is constantly evolving to more efficiently govern the fulfillment of human proclivities.

Wilson is fortunate to be on the cutting edge of NEXUS development, cranking out code for a highly innovative software development firm while others are pouring concrete and repairing solar tiles. He should be happy. But while his endless superficial whims are satisfied in an instant, there remains no cure for loneliness.

When his coworkers and loved ones suddenly begin dropping like flies, it becomes clear that loneliness is the very least of Wilson’s problems. As clues to a sinister conspiracy begin to emerge, his frantic search for the truth drives him from the lazy comforts of home to the barren surface of Mars, where unspeakable horrors await.

Wilson must outrun gangsters and politicians, outwit trained assassins and fend off hordes of flesh-eating creations before the world as he knows it is completely destroyed."

Create the next book or magazine cover for Chandra Clarke
CA$299
Ebook cover for Kindle
59
entries
21
designers
Create an eye-catching cover for a book on Big Data
$799
Business consulting for large corporations. We specialize in providing Big Data, Analytics, and Technology consultin...
105
entries
31
designers
Cover Needed for "How To Make Money With 3D Printing" Book
$299
How To Make Money With 3D Printing: Passive Profits, Hacking The 3D Printing Ecosystem and Becoming A World Class.......
175
entries
31
designers
Computer Programming Book About Ruby On Rails Web Development
$299
.
93
entries
20
designers
Create a Bold Cover for My Business Book
$299
I need a sharp, bold, and well designed cover for my marketing book, Google AdWords for Beginners
153
entries
33
designers
Vibrant User Manual Book Cover - Chat Software
GBP 189
I am writing a user guide to help technical and non-technical users learn how to get to know all of the features insi...
84
entries
17
designers

We saved a spot for your book cover contest.

Get started now
Gamification Book Cover (for the hotly anticipated sequel)
$499
Gamification is the use of game, behavioral economics (psychology) and loyalty concepts to change people's behavior a...
125
entries
34
designers
Capture the Zeitgeist and Promote Entrepreneurship
USD 499
What the Organization Does: One sentence Summary: Jobs are getting more competitive and less profitable while en...
203
entries
46
designer
Front and back book cover for IT book
$499
We make the world a better place by helping people use appropriate information technology to achieve their goals...
93
entries
19
デザイナー数
Design a cover for a book: How to Start a VoIP Business
$299
Printed book and ebook "How to Start a VoIP Business: A Six-Stage Guide to Becoming a VoIP Service Provider"
175
entries
40
designers
Future (book cover)
US$299
I write about security and technology and the humanities....
142
entries
44
diseñadores
Instagram Book Cover
$299
Help people make money on Instagram....
171
entries
45
designers
Learn more about book or magazine cover design
See how it works